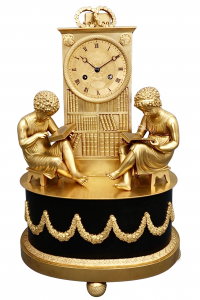 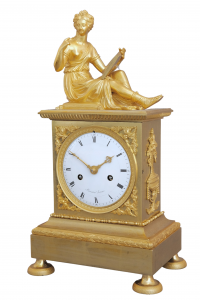 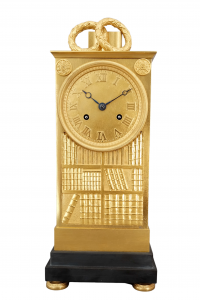 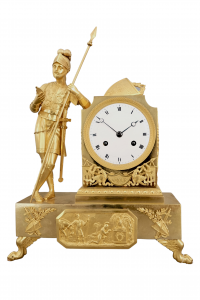 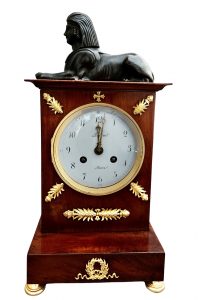 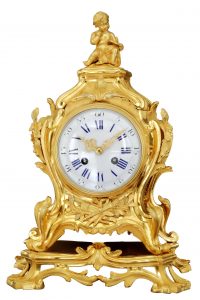 At The Clock Clinic we have a fine selection of Antique French Decorative Clocks, mostly from the late 18th and early 19th Centuries. The featured clocks are, for the most part, from the latter part of the Empire period when the French monarchy was being restored. During this era there was a greater emphasis on the narrative quality of figurative sculpture on clocks. Fine and elaborate enamelled dials became more popular, as well as some wonderful technical innovations.

Napoleon’s desire to have a style inspired by the grandeur of ancient Egypt and imperial Rome was the driving force behind the Empire style. The figurative styles of the clocks were influenced by historic events, such as the clock fourth from the left featuring a Crusader.  It appears that the crusader is looking at a picture of his love, as indicated by the word ‘Amour’ engraved underneath the dial.

Clocks featuring libraries were also popular during this period. The clock on the far left is a fine example of an Empire ormolu clock featuring two children diligently studying in a library, with beautiful details. Without any regard to time, both are sitting in front of a clock. They wear chitons and their dress, hairstyle and bare feet indicate they are from the Ancient Roman era. The one at the left holds the book and follows the text with a finger. The other one on the right seems to read aloud, which we can see by the gestures of the left hand. As with the clock featuring the crusader, this clock doesn’t just tell the time, it also tells a story.

The mahogany mantel clock with the bronze sphinx is a great example of Napoleon’s fascination with Egyptology. The inclusion of sphinxes on furniture and clocks throughout the 1800’s were popular with the French gentry as they celebrated Napoleon’s conquest of Egypt.

The clock on the far right (or the last one if viewing on a phone) is in the 18th Century Rococo style but dates from the late 19th Century. Resurrecting this grand period through clocks, furniture and other design was widely undertaken and created by some of the finest makers of furniture, bronzes and art of this time. This is a beautiful clock with a cast Rococo case with floral mounts, surmounted by a putto holding a sundial. Putti (cherubs, sometimes with wings) represented the omnipresence of God during the Rococo period and were a feature of clocks, furniture and artwork.

To find out more or purchase one of our featured clocks, please click on the image and you will be taken to the individual item.